We’ve all seen the advert.

The slogan with a rather large tick underneath, or above it.. 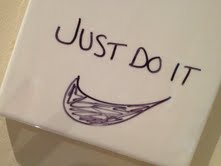 What if we didn’t think about it, and we just did it?

(Disclaimer – I’m talking about stuff that’s legal, moral and ethical. Just in case you’re wondering. And for those of you who have seen ‘Knocked Up’ I also do not recommend saying ‘Just do it, already’ as Katherine Hiegl does).

Such a lot of time is spent thinking about the things we want, need or ought – to do. Couldn’t that time be better spent elsewhere. For example – Just doing it?

So what if it’s a little rough around the edges when we do, do it. We can work on it, improve it. The priority being, doing something.

This post isn’t going to be perfectly written. There’ll be grammatical errors, although I hope not speling mistakes (sorry I couldn’t resist mistyping “spelling”), and it may not flow as I’d like. But it nearly wasn’t written at all. In fact no post was going to be published today.

This is not due to a shortage of ideas for posts. Oh no, among the contenders this week were deliberately ambiguous titles such as;

Setting Limits In An Abundant Society

Getting Back On Track

The Art Of Fast Tidying

I almost wrote a post asking you Guys to decide which title to go with. But then didn’t. I did chores instead. Now that’s a desperate act, to delay writing, if ever I confessed to one.

Well, I also had another post in mind entitled ‘Read All About It’. Which also didn’t get written. But what I actually did was take my own advice and read some inspiring blog posts, which I shared over at Facebook today and will now also share here and here .

If you ever find yourself stuck in a rut – read.

Read. Absolutely Anything. Just do it.

I didn’t go searching specifically, the posts found me. I now have the added pleasure of believing that it was meant to be. There was even a Paulo Coelho quote hanging around on my timeline (Coelho is the King of destiny aka The Alchemist).

“You are what you believe yourself to be.” ~Paulo Coelho

By reading a couple of blog posts and a 8 word quote,  I’ve written an impromptu blog post (albeit a slightly random-rambling-one) and made significant headway into launching a  new business. And it took me less than an hour.

Now that’s what I call Just Doing It!

What could you be doing?