I have a poorly child at home today. So while he naps I’ve hit the blog, opening it up for a Thursday chat.

Since becoming a mother I have found that guaranteed blocks of time, where you can focus on doing a specific thing, are few and far between. Now that both of mine are in school there is definitely more time to devote to certain things, but as 1 became 3 (me+2 mini-humans) I’m never quite the master of my own destiny. The phone can always ring with the ‘Mrs Wright…It’s about your son…’

(I once took such a call when I had forgotten to collect my daughter from school – but that’s a story for another day).

One thing I have learnt is to maximize (maximise? couldn’t decide) the minutes, as the hours may never come.

There must be so many minutes available to us that when viewed as unique units of time they seem insignificant, but when added together combine to generate substantial opportunity to ‘get things done’.

In the past I’ve been guilty of spending more time thinking about things than actually doing them.

But now I try to Just Do It.

Little and often is the name of the game. Those 10 spellings the kids need to learn for the test each Friday? 1 minute practicing 2 at a time.  The daily physio exercises required to rehabilitate from hip surgery? Instead of 30 minutes doing them all, just 5 minutes spent on each exercise staggered throughout the day should achieve the same goal. 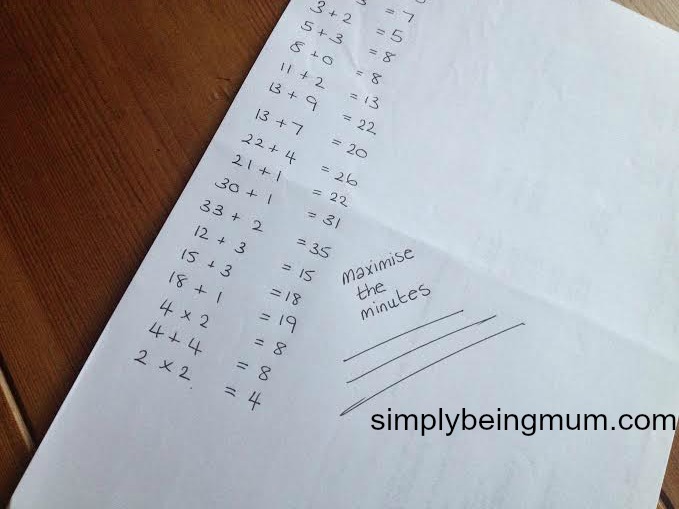 Just a couple of minutes of maths makes the world of difference. They’re not for me by the way!

And as for decluttering – well as you know I’m a fan of 10 minutes a day.

The question to kick off the open house (blog) today is how do you maximize the minutes?

But as always on a Thursday feel free to deviate down any train of thought!

Welcome to SimplyBeingMum – one mother’s personal website documenting the journey toward a family life simply done.