Food Waste Friday began in 2008 when Kristen aka The Frugal Girl, embarrassed by the amount of food she was wasting, decided to call herself out and blog about her food waste on a Friday. 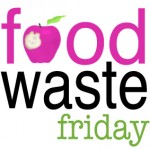 I joined in 2010 and have been hosting alternate weeks for a couple of years now as Kristen kindly invited me to get involved.

My spin on #FoodWasteFriday is to photograph my Friday fridge, and to follow a No Waste Tastes Great routine.

You can read all about my routine here.

This week’s Fridge has a little something in it that shouldn’t be there.

Can you see what is out-of-place?

I agree, 2 open jars of salsa is unforgivable (guess who forgot she’d already opened one?) but no it’s not that.

They were of course added in just for the shot. It’s commonly known I am a non-conformist, but even I wouldn’t decorate a fridge with daffs.

They’re there to brighten the day. There are 2 important aspects (3 if you factor in #FoodWasteFriday) of today.

Would there ever be a better day to start a Friday routine if you haven’t already, and join the growing tribe of us who participate in #FoodWasteFriday?

An integral part of #FoodWasteFriday – and in my opinion, why it works so well on reducing food waste – is that you ‘call yourself out’ each Friday.

Anyone out there ever joined a slimming club? That one day a week you get weighed, kind of focusses the mind doesn’t it? That’s what #FoodWasteFriday does.

My confession this Friday:

Looks rather delectable doesn’t it? Salad always does, particularly when photographed with a decent lens. I assure you it doesn’t smell as good as it looks. This was the Hubby’s lunch from 2 days ago. It didn’t make it to work with him. It was already a bit of a Russian roulette with the salmon I had included, but knowing that your nose is a great way of establishing what is edible and what is not we took a flyer – consensual of course. I wouldn’t serve up borderline food without notifying him first. Then should he experience stomach cramps after digesting, at least it would give him a head start when attending A&E. Not that would happen, we all know that. Although the way our lucks going currently…

I’m a sensible gal. I don’t like food waste, but neither do I like a hospitalised husband. It’s being disposed of.

What shouldn’t be in your fridge this Friday? I’m talking perished food rather than daffodils of course!

Please do use the hashtag #FoodWasteFriday if out and about on social media – it helps us to all connect! Thanks Guys!