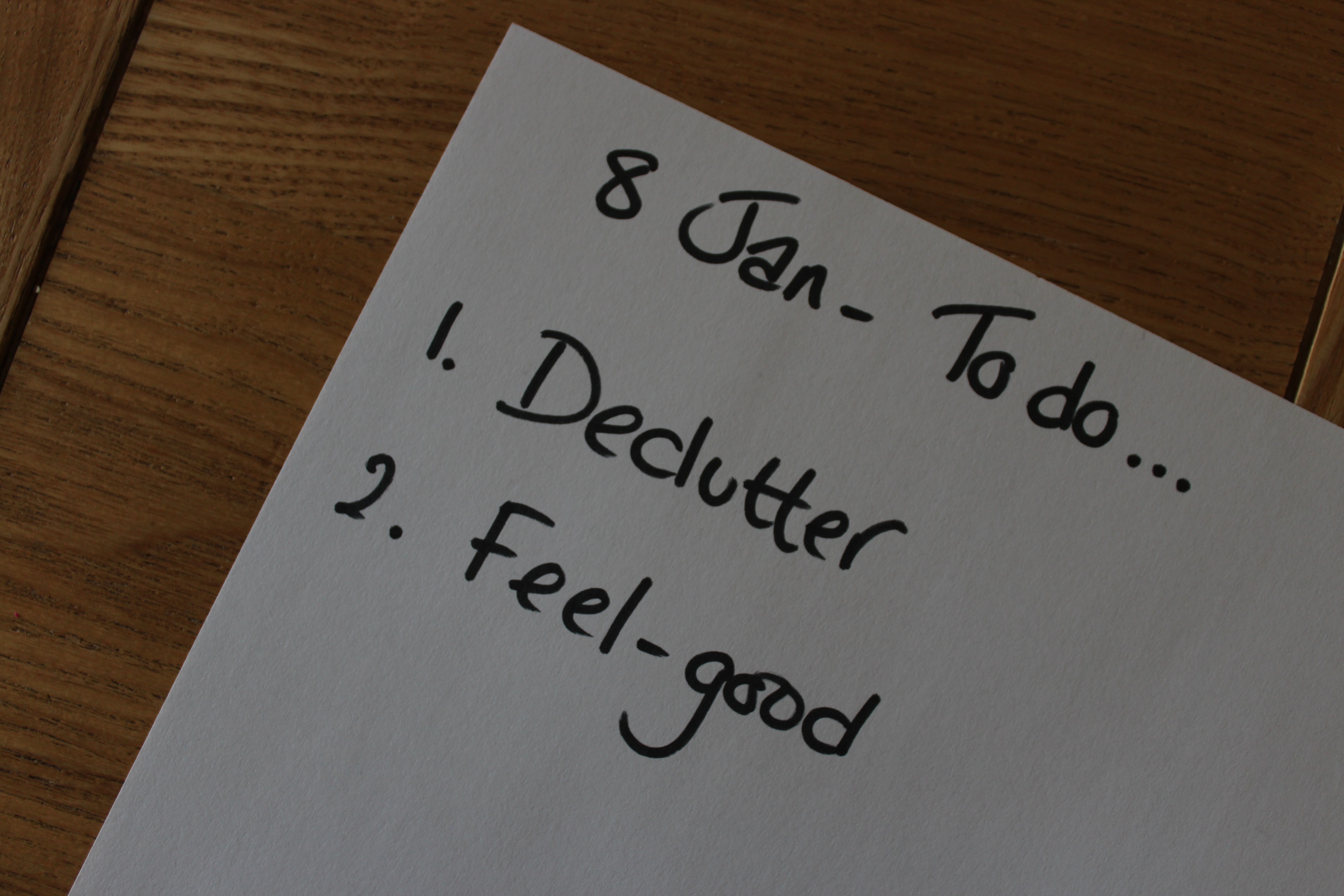 However, it may be the thought of embarking on a major cull is daunting and overwhelming. Some might procrastinate, as I do, at getting started. But as with most things worth doing, and doing well, the resulting sense of achievement, upon completion, makes the process so worthwhile.

There are books, blogs, and reading-a-plenty, on why decluttering makes us feel so good.

Without a doubt there’s more to it than just clearing physical space in our homes and lives. Decluttering can make you feel emotionally lighter and in-control.

So, the question is, if the end result makes us feel so good, why is there sometimes resistance to decluttering?

I believe this is because the physical process of decluttering can create highly negative emotions.

Basic regret being just 1 of them. There are others. But we’ll focus on regret today. My word for 2014 is ‘focus’ after all!

Decluttering can mean facing up to purchases made, that shouldn’t have been. Money spent unnecessarily. Everything in life has a perceived value and an expected return.

I recently went to a car-boot sale, as a seller.

(Car-boot sales are common in the UK.  Anyone can pitch up, in their car, to a field or designated area and sell items) 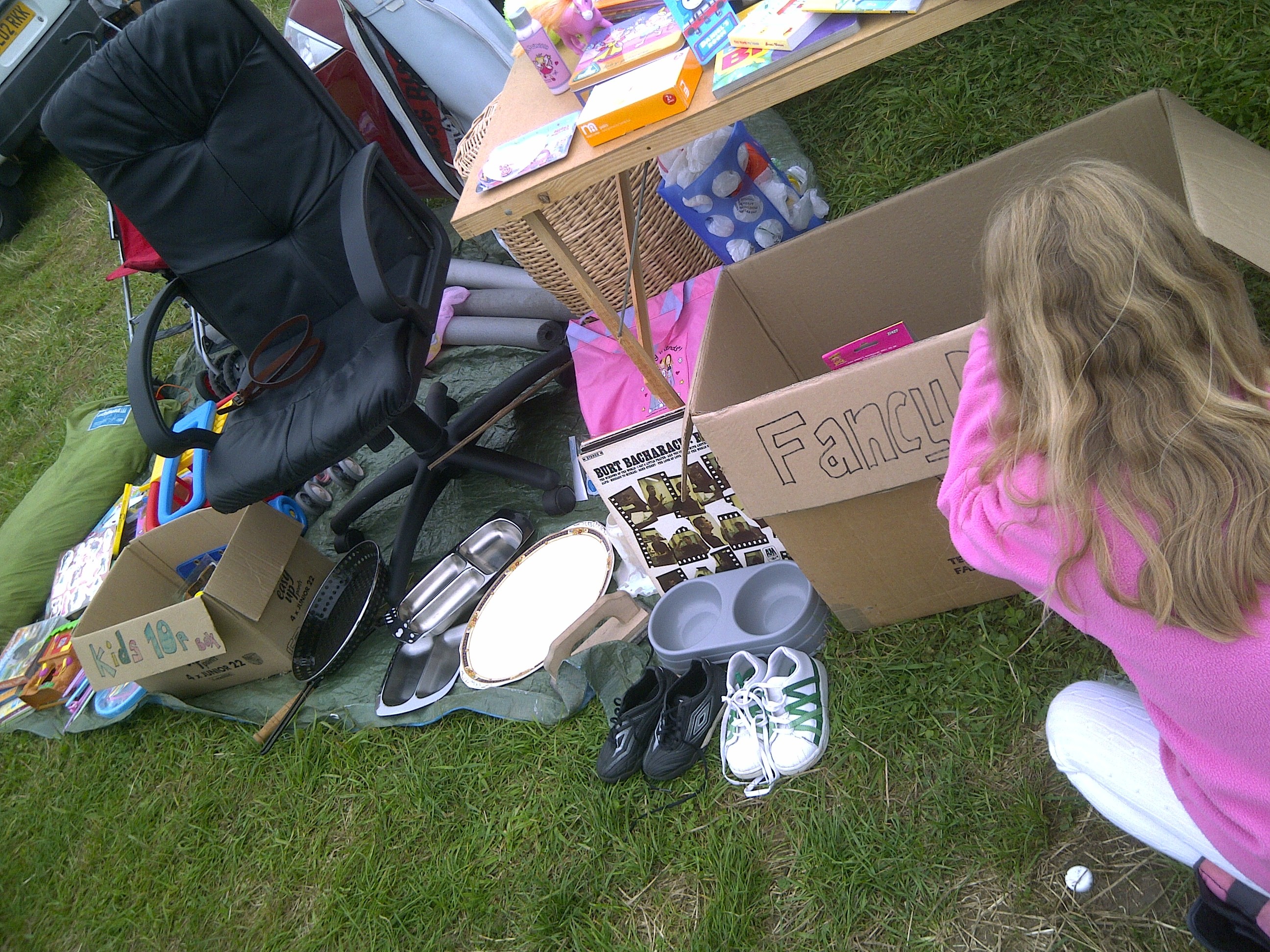 It is the perfect example of perceived value.

Brand new, through regular retail outlets my table of wares would have been worth 10 times what it was sold for. Maybe more than that.

I gave my items away, figuratively speaking. But an item’s value is only what someone is prepared to pay for it.

The general advice in dealing with unwanted items is usually to (and in this order):

Receiving so little back, for money invested, can increase negative emotions with decluttering.

If  you need the cash, then regardless of how much the item generates, it probably is worth selling your unwanted stuff. Because every little helps. It’s true. Look after the pennies and the pounds will look after themselves is a frequently used and very wise British saying. Debt reduced by any amount is a positive step forward and worth pursuing.

However, if the burning desire/need to raise extra cash isn’t there – the effort involved in selling small-ticket items can be debilitating. I personally know. This has happened to me. For the last 2 years I have held a Spring Sale. Spurred on by publically announcing I was holding an experiment to raise £600 through unwanted household items – I set about slowly and surely selling redundant things.

I did it, for two years. But not this year.

Extra money would be nice. But this year, 2014, the cull needs to be quicker. My inclination to spend time (which has its own worth) on selling our stuff, is low. It’s probable the items would end up hanging around the house, taking up space and my energy. My low motivation to sell would result in procrastination.

The emotional (and time) benefits of culling quickly are much more alluring.

So, how am I going to deal with the accompanying negative emotions of regret and indecision?

By donating, I am removing myself from personally benefiting from the value realised by the actual sale or hankering after the perceived value of the item. I can objectively conclude that every penny raised is benefiting someone who would not have benefited otherwise.

There are 3 ways to do this.

The feel good factor, in my opinion, increases from the first to the third method of donating. Although each are commendable.

Choose a donation method that suits your circumstances.

I’ve done 1 and 2 for years. I’m now about to embark on donation method 3.

At a recent church service, the vicar mentioned a local women’s refuge. I’m going to investigate what they need and focus my cull on those areas first. Then as momentum builds and decluttering fever sets in, I’ll bag up all other items and donate to the local charity shop.

I want to do good, but I also want to feel-good. Honestly I do. Why not? Life’s too short to regret misspent money on needless items. We all do mis-spend money, from time to time, even those who consciously spend. In reality I’m not just decluttering things I’ve personally bought. Much has been gifted to us. But still, it has a perceived value.

If the promise of feeling-good hasn’t got you reaching for the charity donation bag then just imagine how many karma points will be coming your way by donating.  And we can all do with topping up our karma bank now and again.

**There are bloggers better versed, than I, on giving decluttering advice.  If this is a subject you’d like to learn more about then head on over to one of my all-time favourite blogs The Minimalist Mom and join Rachel’s 2014 Clutter Cleanse.

**My Simple Guide to Conscious Spending was included in a great BBC article on reducing spend in 2014. The BBC article offers some great advice.