It’s the start of another school week here in the UK.

With my two safely deposited at school, I’ve found time to put fingertips to keyboard to tell you all about the new competition from Premier League Primary Stars.
Earlier this year I was introduced to #PLPrimaryStars when I visited Pikemere School to see first-hand how they are benefiting from the resources that Primary Stars are providing – you can read about my visit here.

There’s more information about Premier League Primary Stars at the end of this post, but don’t skip to the end just yet!

Last Thursday I had the great honour of meeting the staff and pupils from another school – Maple Court Primary in the heart of Staffordshire, Stoke-on-Trent.
I say ‘heart’, because sincerely it was one of the warmest feeling (and we aren’t talking temperature) primary schools I have ever had the pleasure to visit.

My visit to the school was an invitation to the launch of the Premier League Writing Stars And was I in for a treat.
(The poetry competition is supported by the National Literacy Trust and is for children aged five to 11)

The first person I met was Assistant Principal Sam Cooper, or rather ‘Super Cooper’ as she is known.
Sam explained that Maple Court had signed up to Premier League Primary Stars, some time back, and that they were over the moon with the impact it’s had on their school. Previously, I’d been told how successful the programme was, by staff at Pikemere, and Sam reinforced the message of ‘Why wouldn’t a school want to get involved?’

And get involved Maple Court have.

After guarding the door, so as not to spoil the surprise that Stoke City’s Pottimus was onsite, I followed the team mascot down the corridor to a bright and cheerful school assembly hall. In the hall, pupils from years 3 and 4 were ready to share their own poems written to kick off the Premier League Writing Stars competition.
In small groups, the children stood in front of their classmates practising their poems to Pottimus, while waiting for the extra special guest to arrive.

Their poems were all based on RESILIENCE – with the theme of ‘Try, try, again’ inspired by the William Hickson poem.

Maybe this clip will explain better than I?

While watching the clip we waited for the guest of honour to arrive. It was put out to the kids… who could it be? Which one of Stoke City’s players would be popping by to hear their poetic interpretations of resilience?

It was Joe Allen. A huge roar of appreciation broke out.

Time for the excited pupils of Manor Court to showcase their poems once more.
Heading up in groups of 2, 3 and 4 they shared excellent advice on how to keep trying against all the odds, in rhyme.
Such tremendous effort was put into perfecting the performances, with one stand-out duo having exceptional timing and actions to bring their poem to life for the captivated audience, many of whom were sporting their Stoke City football shirts.

The pupils received a round of applause from the Welsh midfielder, and a congratulatory acknowledgement of ‘AMAZING’.

The poems preceded a fantastic Q&A session with Joe, where the young boys and girls asked pertinent questions such as:
Question: “What was your favourite subject at school?” Answer: PE
Question: “How much has resilience played a part in you becoming a Premier League footballer?”
Joe explained in his early career he had disappointments when trying to get into the Welsh under 16 national team, but he’d persevered and achieved his dream a little later. He did eventually play for Wales as he had hoped. He did this by never giving up.

(I loved this explanation of how resilience really plays a part in achievement – it’s good for children to hear how to remain positive and focused and ultimately achieve their goals)
Moving outside for a few photos, the pupils got time to test Joe on his rhyming skills by playing a game. 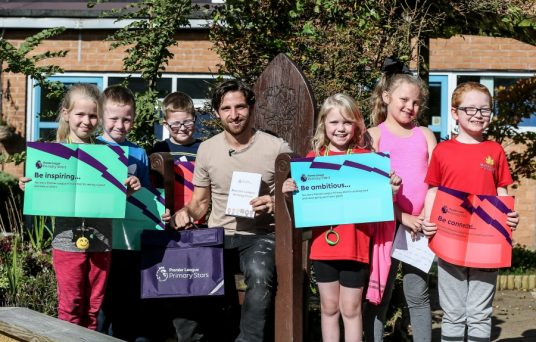 Without a doubt the children had the edge (sorry Joe) which is testament to Primary Stars itself in that the pupil’s literacy skills are already superb.
I’m thinking the pupils of Maple Court Primary School will do very well in the Primary Stars Writing Competition. Good luck kids!

If you are a UK parent, or teacher, who would like to know more about Premier League Primary Stars and the  Writing Stars competition, then keep reading…

(Parent’s don’t forget to tell your school about Primary Stars. Hand on heart from what I have seen it’s definitely having a positive impact on primary pupils! This may be a sponsored post, but I only collaborate when I truly believe in a project)

Backed by names from the worlds of football and literature, the campaign is open to all primary schools in England and Wales and aims to get young people writing poetry in different creative forms.
Inspired by the William Hickson poem ‘Try, Try Again’, which is recited by footballers in the recent Premier League Primary Stars advertising campaign, the competition asks school children to write around the theme of resilience; what does it mean to you to try and try again? Entries can be any form of poetic writing including a rap or music lyrics. Teachers and parents can register or nominate their child’s school to take part at PLPrimaryStars.com.
Entrants to the Premier League Writing Stars competition will have until 22 December to submit their original poems.

All entries are submitted via schools and teachers and parents should visit www.plprimarystars.com to register or nominate their schools to take part.

What is Premier League Primary Stars?
Premier League Primary Stars is a national primary school programme that uses the appeal of the Premier League and professional football clubs to inspire children to learn, be active and develop important life skills. Clubs provide in-school support to teachers, delivering educational sessions to schools in their communities. Free teaching materials ensure the rounded programme, which covers everything from PE and maths to resilience and teamwork, is available to every primary school in England & Wales.
The Premier League currently funds 95 Premier League and English Football League clubs in England and Wales to provide in-school support for teachers.

For more information or to register, visit: www.plprimarystars.com.