The £600 Challenge isn’t about spending, it’s about generating cash. It’s about clearing your clutter.

But an unexpected outcome of the challenge has been the opportunity to teach the Kids how to manage their money.

A couple of weeks ago we decided to make the £600 Challenge a family affair. You can read all about it here.

The Kids now have a monetary target themselves, outside of the challenge, which they are aiming for in order to each purchase a much coveted piece of equipment.

What this meant in practical terms was that last week, while we were holidaying in the UK, they purchased zero ‘tat’.

› [U] informal anything that looks cheap, is of low quality, or in bad condition: Like most souvenir shops, it sells a lot of old tat. (source).

The Kids are very fortunate in that when they go on holiday, family usually give them a little spending money to take with them. This typically gets spent. The majority on what I would describe as ‘tat’.

But not this holiday. Want to know why? 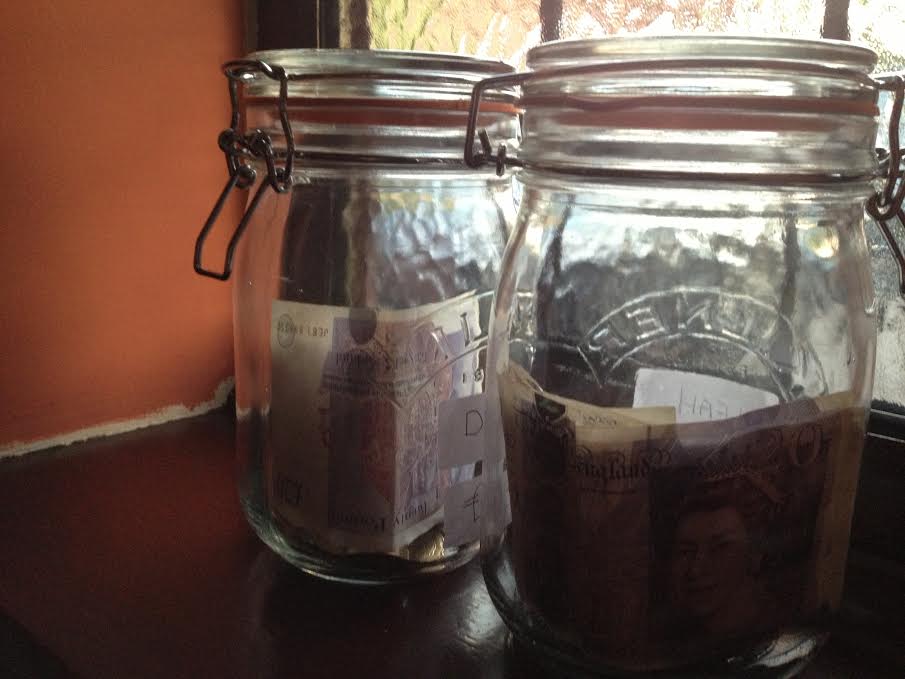 (The jars are a visual reminder of how their fund is growing and they are getting closer to achieving their goal!)

These jars contain the cash they are saving to purchase their hearts desire – well their current hearts desire. Instead of spending mindlessly on holiday, they were much more considerate of what to buy as they intended on adding any holiday money left over to the jars at home.

The £600 challenge has really ignited their imagination.

And while we were away this comment popped up on the blog also from another mother, in reply to my post Trinkets Not Treasures.

“Thank you for this phrase! We went to the aquarium this week and had to go through the gift shop to exit the building. My 10 year old started telling me about the things she could buy there. I told her, “If you spend all your money on trinkets, you’ll never have enough for treasures.” She agreed and the usual argument and pouting were avoided!”
(Thank you Jenn!)

Not only are they selling their stuff to generate money, they are being much more mindful about what they spend – win-win!

An update on where we are with the challenge:

This weekend a lot more stuff was listed on eBay so I’m hoping when I check in next week to see a sharp rise in the figure as there’s still over £500 to go, and we are into August already!
How is the £600 Challenge going for you?

Welcome to SimplyBeingMum – one mother’s personal website documenting the journey toward a family life simply done.