In particular he adores the character – Mary.

Downton Abbey returned to the UK, for its 5th series, on Sunday. But he doesn’t watch it as it is shown on TV – we catch up on Netflix (we haven’t yet started series 4 – and I am aware this  series caused some controversy in the UK press so we may skip it either wholly or in part).

He doesn’t watch as it is shown for 2 reasons.

1. It’s on too late on a Sunday night

2. I like to watch first so I can fast-forward through age-inappropriate scenes.

Why do I let him watch it? Another 2 reasons.

Now (and, please, I do not wish to offend any die-hard Downton fans) it isn’t going to win any prizes for literature (and this is not it’s aim). As a TV show it is, in my opinion, a great history lesson for Kids, as it’s working it’s way through the early 1900’s.

(For the record I also know I am not going to win any prizes for litertaure ;))

I can sit with the Kids and when they ask questions, we can discuss ‘how things were then’.

So, seeing there was interest, I decided to work our way through the classics on Netflix.

We started with the BBC dramatisation of  Jane Austen’s ‘Pride and Predjudice‘  then we moved onto ‘Sense and Sensibility‘. We attempted ‘Emma’ although the amount of dialogue (and lack of action) in this last one made it difficult for the kids to remain interested. Just last week we completed Elizabeth Gaskell’s ‘North & South‘ (which, and I never thought I would say this has top-trumped Pride and Prejudice for me!).

There was also some DVD borrowing – My Mom lent us ‘Lost In Austen‘ that she picked up from a charity shop and my big sister threw ‘Wives & Daughters‘ in the mix. 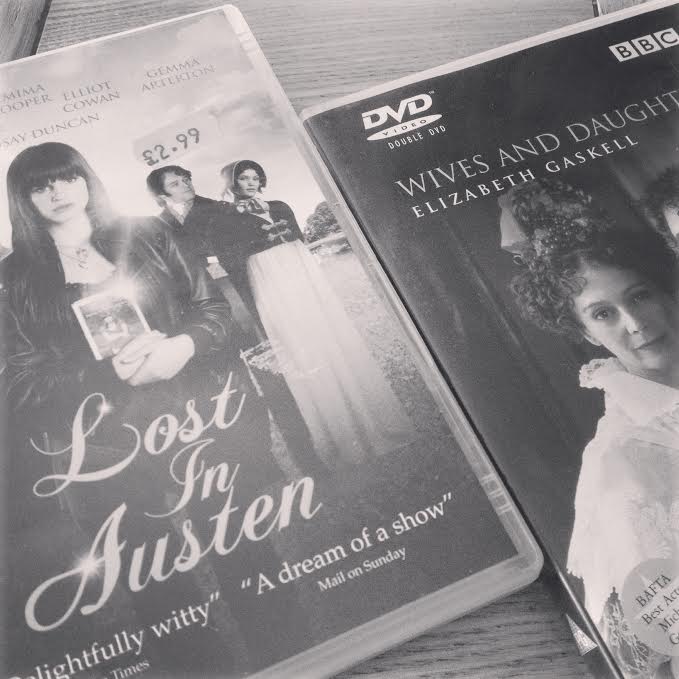 (Top tip – if you are a Pride & Prejudice fan, ‘Lost In Austen’ is worth watching – very entertaining!)

TV can get a bad rap in my opinion. See this old post where I defended it last time.

I loved literature as an older teenager, but it wasn’t introduced to me at an early age. I can understand why. Reading a classic to, or with, a 6-year-old or even a 9-year-old would be immensely difficult.

But by watching a dramatisation, the book can be brought to life. A 6-year-old may not understand everything that happens, but when he asks;

‘Mum why are there candles on the table?’, we can talk about the invention of electricity.

And maybe it will ignite their imagination to want to discover more about English Litertature, and not find it a chore when they HAVE to study it.

Just this week my daughter now is, as hoped, starting to read a classic novel. She is reading it with me and we are taking our time.

“It does not matter how slow you go, as long as you do not stop” Confucius

**Many classics are available free through iBooks**