Over 4 years ago I started on a journey toward a family life simply done.

You may have read my story.

Feeling overwhelmed with life, commitments and stuff in general, I knew something had to change.

A very physical demonstration of my state of mind, at that time, was a hoard I had been stockpiling for many years.

As I started to make the transition into adulthood, collecting bits and pieces of paper became a habit. Receipts, flyers, maps, menus. Valueless giveaway items or sources of information.

It didn’t take long for it to spiral out of control. I’d feel anxious if the waiter didn’t return a receipt at a restaurant after we’d paid the bill. If the eating-place had paper place mats I’d remove mine before the meal so that I wouldn’t soil it and could therefore keep it.

Looking back I should have realised this was rather odd behaviour. But I didn’t. It became obsessive.

The paper items had to be chronologically recorded in a scrapbook. Many hours were spent with a glue stick in hand, desperately analysing which event happened first, and peeling off receipts that had been stuck in the wrong date order.

In fact I frequently took holiday from work to scrapbook, and I was sticking and gluing in front of the TV as the devastation of 911 unfolded.

The obsession continued, and the scrapbooks were kept up to date.

That is until I became pregnant. I had amazing plans for the ultimate scrapbook chronicling my first borns life from conception to adulthood. Dramatically presented on Junior’s 18th Birthday.

Then reality, and motherhood hit. No time, sheer exhaustion, a million (and one) things to do 24/7. Scrapbooking went on the back-burner, but collecting items for the scrapbook did not. The arrival of a new person, into the world, increased the collecting. So many precious moments to capture, that if I missed them would be lost forever (I’m also a over-enthusiastic photographer).

There are undoubtedly a multitude of reasons as to why I have this compulsion. I have my own theories of course, but they aren’t relevant to where I am now.

(This is a much edited version of 4 years ago) 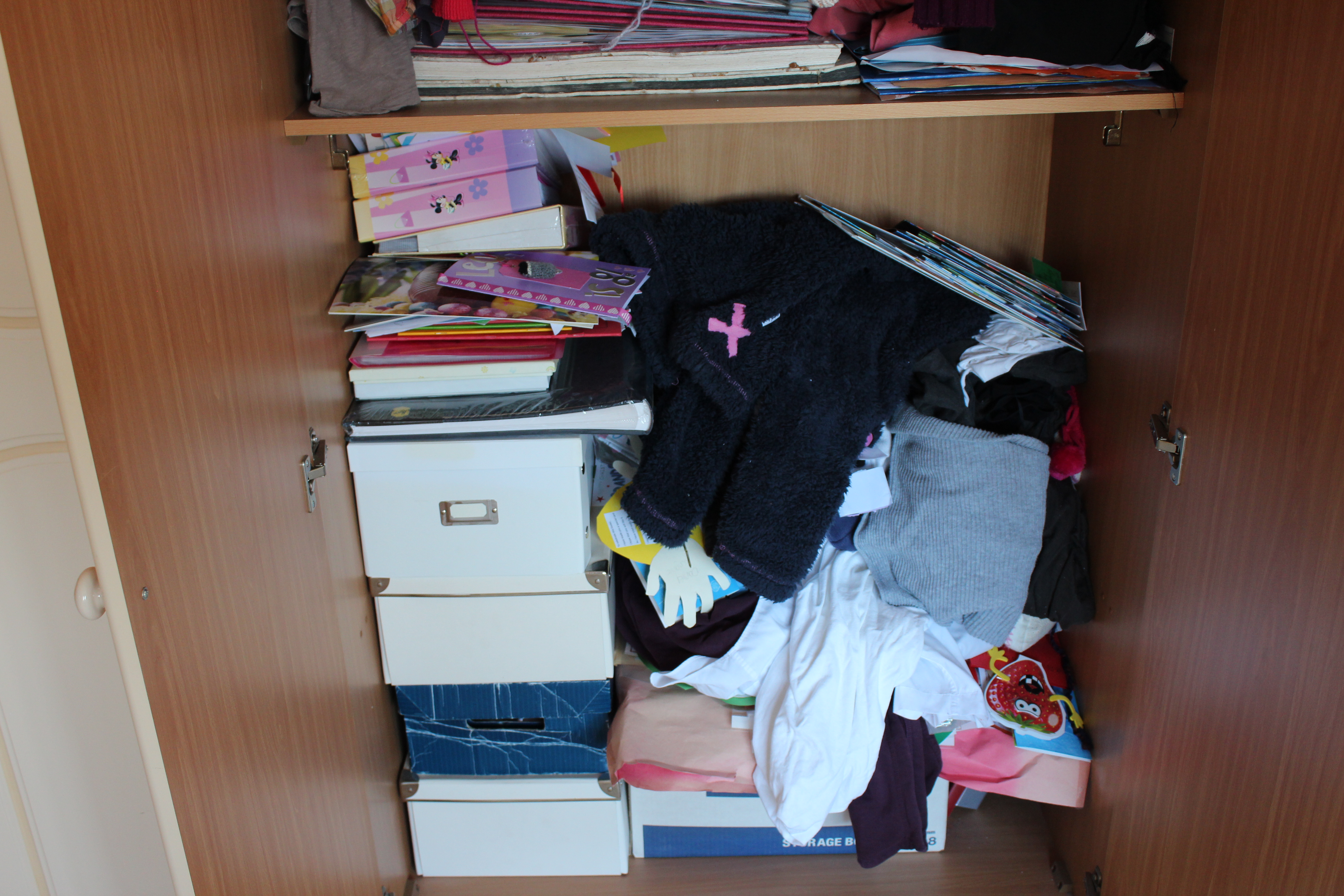 (a pile creates a pile…clothes to go to recycling strewn on the top! Shocking!)

Or at least it was, until last Monday. 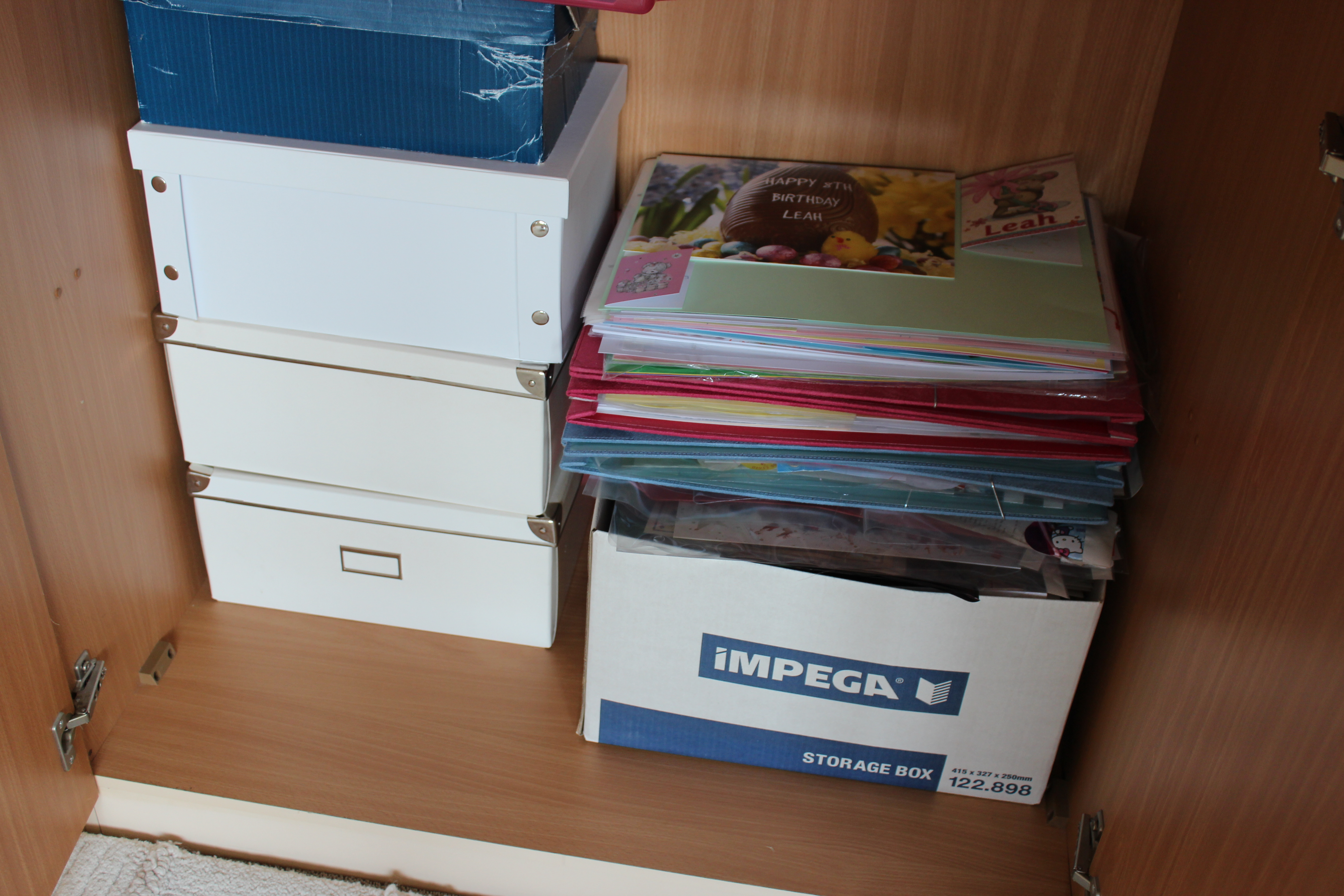 Hoarding and decluttering is bang on trend, to coin Gok Wan’s famous catchphrase,  at the moment. Books, blogs, TV shows, …

I find this show a little strange. But that may be because I have hoarding tendencies. The show seems to glorify OCD when it manifests itself in cleaning, hygiene and tidiness.

Regardless I watched it with interest and have also poured bleach down the sink today (there was a lot of bleach in last nights episode!), so maybe I learnt something?

Obsessive cleaners (note, not professional cleaners – members of the public who have a diagnosis of OCD) are introduced to cleaning-product-shy people who some of which (coincidentally?) also have some form of hoarding behaviour.

These two extremes make great TV, but as someone who can physically empathise with the anxiety of letting go of certain items, do wonder whether this is the best way in which to help a hoarder?

After all it’s taken me 4 years to get to where I am. Slow and steady wins the race.

There’s still work to be done but I can see where I am headed and have a plan.

“It does not matter how slowly you go, so long as you do not stop”. Confucius